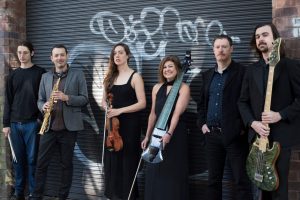 Elysian Fields was formed by Jenny Eriksson, Matt Keegan, and Matt McMahon in 2015.  The band is an ongoing experiment in creating new improvised and composed repertoire for the electric viola da gamba – of which Eriksson is believed to be the only Australian exponent. The band has released two CDs: “What should I say” and ‘Fika”. Both stream on major platforms and can be purchased on this site or via Buywell Music and Bandcamp.